Kyle Richards Explains Why She’s So Excited About SculpSure 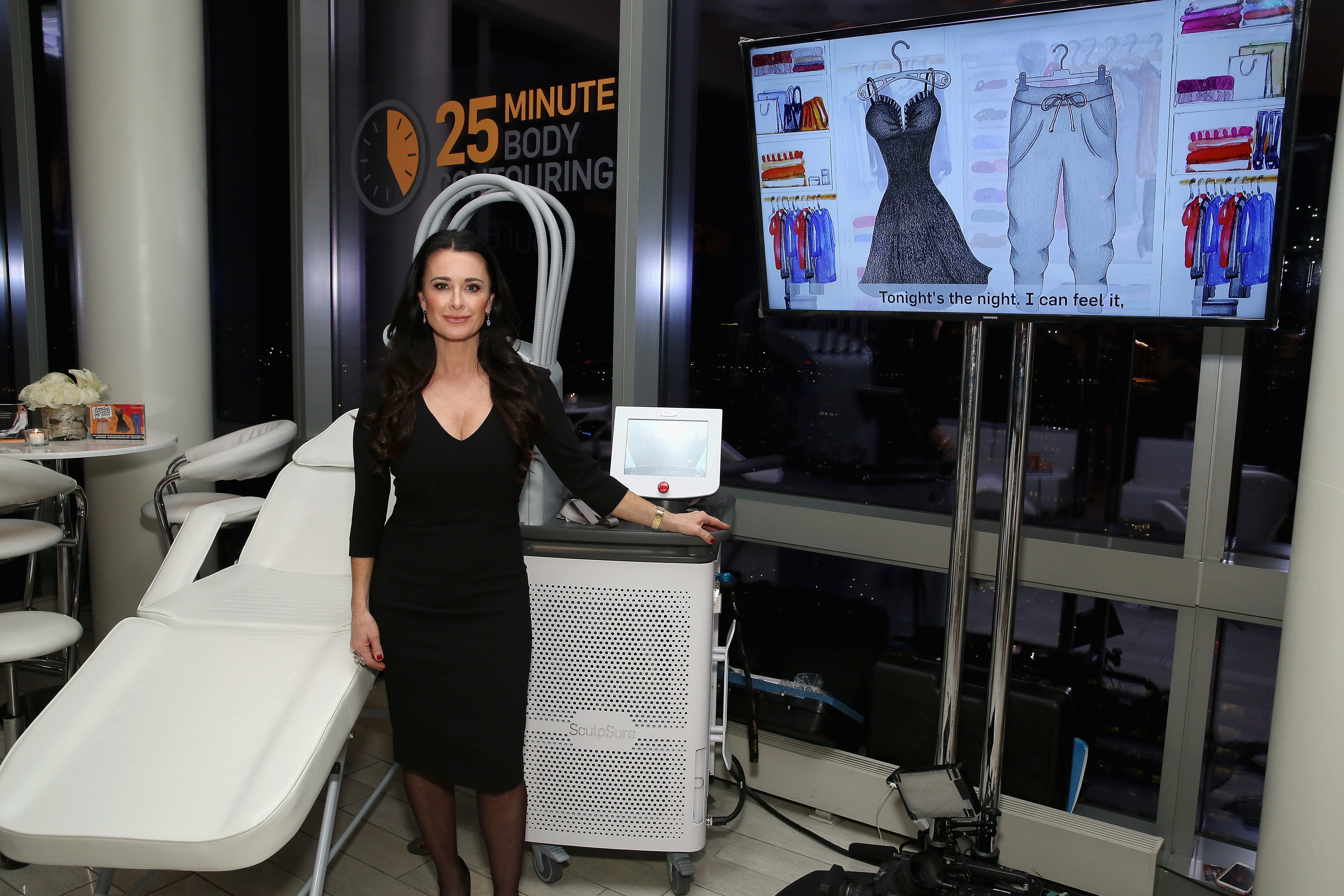 How did you get involved with SculpSure?
KYLE RICHARDS: When I heard what it was I was so excited. I always want to look my best. I try everything I can—exercise and eating right—but there are always certain parts of my body that no matter what I do I can’t change, so I was really excited to try it and get involved in it. And when I went in for treatment I was so impressed.

What makes SculpSure so different and effective?
KR: SculpSure is a light-based body-contouring laser. It actually destroys the fat and it’s only 25 minutes. You’re in and out. There’s no downtime, no needles—it’s non invasive, I was talking on the phone while I was doing my treatment and that’s it, done. You can lose up to 24% of [your] fat in [the targeted] area. They say [you see] results after one treatment so that’s very exciting. I did my love handles and next time I’m going do my stomach.

So is it a weekly thing?
KR: No, that’s what’s so exciting. It destroys the fat cells so [they] don’t pop back up. It’s not scary like a liposuction. It’s amazing—it takes less time than a facial.

The hashtag of the recent NYC event was #‎Ifyourclothescouldtalk. Why?
KR: It was part of the campaign to make it fun. It’s kind of like the concept, “If your clothes could talk, what would they say?” My skinny jeans would be like, “How come you haven’t put me on or looked at me in a while?” Or if the clothes could talk to each other like, “How come she only hangs out with you?”

Did you make any healthy New Year’s resolutions this year? Are you still following them?
KR: Yes. Some people don’t like them but we always sit down as a family and talk about what our New Year’s resolutions are. One of mine was to not drink coffee—I really love coffee and I want to switch from coffee to tea, I feel healthier and cleaner doing that. And I’m not a big soda drinker but I drink a regular Coke now and then. I think Coke is the best drink on the planet, so I stopped drinking soda. And I’m trying to maintain my exercise, I’m trying to include a lot more fruits and vegetables [in what I eat]. I eat healthy as a whole anyway, but I’m just trying to include even more greens, I’m trying to eat a salad with every meal except breakfast, no matter what.

How do you use your platform as a Real Housewife to raise awareness and support other brands and causes?
KR: I’ve made it a point to be involved in charity. In season one, I trained for a 70-mile bike ride to raise money for cancer, and each season I have done that. I think that’s really important, to use this platform for something good. I do a fundraiser for Children’s Hospital Los Angeles on the show whenever I can. We’re very involved with Children’s Hospital, so that’s one of my top charities. Even something small like the other day when someone’s dog was kidnapped, I’ll post it on my Instagram [@kylerichards18]. I’m an animal lover so if there’s a dog that I know that has like 24 hours left every time I’ve [posted the dog, that] dog always ends up being placed. Even if it’s something like that, it feels really good to at least use the platform for something positive.

You’re a California girl, but where do you hang out in NYC?
KR: When I’m in New York City, I like to make sure I hit every spot. I have to go to Central Park, I have to have tea at The Plaza, I love to be down in Meatpacking, I love to walk the streets in Soho, I just like to get lost in the city. I was always a Midtown girl growing up, but now I’m starting to love Meatpacking. The other day we went into Chinatown and that was fun—I just try to go all over the place. That’s what I love about New York City.

What can viewers expect from the rest of season 6 of The Real Housewives of Beverly Hills?
KR: It’s a really great season from a viewer’s perspective. It has a lot of depth, there are a lot of really intense moments. There are some beautiful trips—we went to Dubai and, of course, our trips never end well, so stay tuned for that. Why is that?

The Doctors TV Show Puts SculpSure to the Test Could there be a way to burn fat without breaking a sweat? Plastic Surgeon Dr. Christina Petti and our test subject...

New year, new you? That’s the most common line this time of year, and now there’s a way to help make that happen (when it comes to physical traits,...

Innovative light-based technology reduces stubborn fat and delivers slimmer appearance in a 25 minute procedure, without surgery or downtime. WESTFORD, Mass., Jan. 21, 2016 /PRNewswire/ — If your clothes...
JOIN OUR EMAIL NEWSLETTER TO GET THE LATEST UPDATES AND SPECIALS